Inside King Ludwig’s palace at Linderhof, we gazed at the king’s bedchamber.  Our guide informs us that back in those days kings often received visitors in their bedchambers, or at least the visitors they were on good terms with.  Considering that the throne room in this palace was in an alcove attached to a hallway and the bedchambers were in a room about four times as big, this news is not surprising. What is surprising is how over the top the decor is, especially combined with the outer gardens.  But is this enough to justify the moniker “Mad King Ludwig?”

Ludwig II was king of Bavaria from 1864 until 1886. Like other royals of his time, he liked displays of extravagance.  He tended towards excess on this score, but then he did have a princely upbringing, and as a king he was inspired by Kings Louis the XIV and XV.  Versailles, anyone?  We enjoyed Ludwig’s excesses via his palace at Linderhof, and his more famous Castle Neuschwanstein.

Most folks’ bedrooms have plain walls, maybe a nice color, maybe a painting or photo. For Ludwig, that was boring.  He liked blue, so that was the base color. Now his challenge was to see how much filigree could be artfully ladled onto that background.  Then, take that motif and apply it to simple things like bed posts, chairs, door frames, and we ended up with elaborate creations, bordering on the absurd.

The style is called rococo, which is kind of like baroque on acid.  Maybe Ludwig and his artists friends were channeling Timothy Leary.  We can’t blame them for eating strange mushrooms before coming up with those designs either, it was a fad of the age for the rich and famous.

Ludwig was terribly introverted, and didn’t like to be around people.  An example: in his dining room, he had a small table that sat on a platform that could be retracted into a kitchen area on the floor below. By pressing a button, he’d signal the staff to lower the table, load it up with his repast, and winch it back up again.  This way he could eat without even seeing a servant.

In another room at Linderhof he had a room of mirrors, possibly inspired by the one at Versailles.  Although it’s smaller it seemed like it had as much rococo decoration, highlighted by many candelabras and chandeliers in that excessive style. The mirrors on opposing walls only magnified the effect. It was pretty in a vignette perspective, but really just too much to take as a whole.  He liked to go there in the evenings to read, with candles all aglow and reflecting throughout.  One wonders how that would be possible to concentrate with all the distractions.  I suppose he got used to it, like some modern kid reading and writing texts while being in class.

The grounds around the palace were also quite elaborate, but much more to my taste. 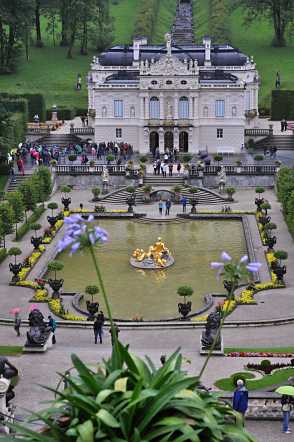 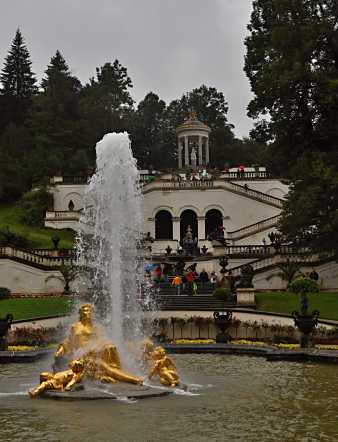 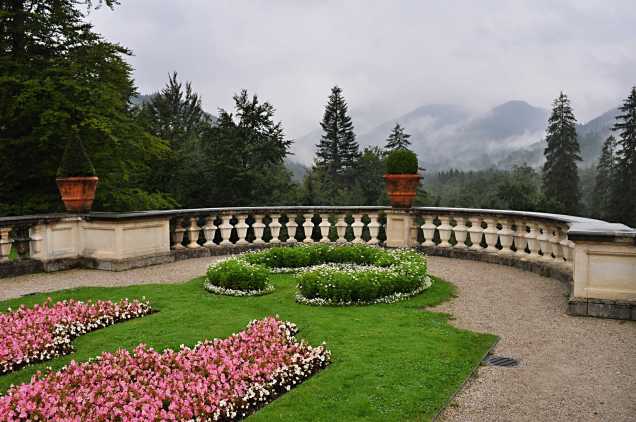 Section of garden at Linderhof

There was even more grandeur at Linderhof, including a grotto complete with a small lake and a boat shaped like a shell, but we can’t forget about Neuschwanstein.

Most Americans of a certain age grew up watching Walt Disney’s Wonderful World of Color.  Ever wonder where the idea for the fairytale castle came from?  Look no further. 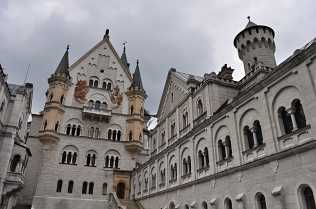 Neuschwanstein from the courtyard 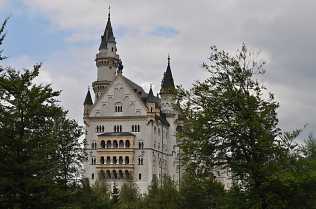 Neuschwanstein from the back

I had visited Neuschwanstein on my trip in 1980, and was looking forward to seeing it again.  In particular I was anticipating a view from a bridge situated across a ravine above the castle, source of most of the famous Neuschwanstein pictures you may have seen.   Just our luck, that bridge was closed for extended maintenance about two weeks before we got there.  Another visitor had better luck…

Approaching the castle, I wasn’t quite expecting the mob scene.  Admittedly my first trip wasn’t in the height of tourist season, but this time the hordes had invaded.  Like at Linderhof, ticketing and access were tightly controlled.  You get a guide, you get her for about 30 minutes, and that’s it.  With luck, you don’t get a noisy toddler trying to drown out the guide.

The interior of  Neuschwanstein isn’t as elaborate as Linderhof, in fact, it was never completed.  Ludwig was obsessed with operas by Richard Wagner, and wall paintings featured scenes from some of them.  He even had one room/hallway decorated as a cave, relating to a scene in Wagner’s Tannhäuser.  Other paintings were of a more religious nature, especially in the throne room. As opposed to Linderhof, here the royal bedroom was small and the throne room large, ornate, and echoey.

After seeing all this, the question remained for me – it was gaudy, but was Ludwig crazy?  His ministers played that card as an excuse to depose him.  Ludwig had no interest in governing Bavaria, and his elaborate projects, of which Linderhof and Neuschwanstein were only two were quite costly.  Ludwig technically didn’t use state funds for his projects – he used his own, but he didn’t really know the value of money and needed loans to augment paying for his expensive hobbies.

So, they used his shyness, indifference to governing, flights of fancy, lack of understanding of money, and possibly even hints of homosexuality to trump up charges of insanity, and deposed him.

The thing is, the day after he was deposed, he and his walking companion supposedly drowned in three feet of water in a nearby lake.  Suspicious timing, to say the least. Ludwig was known as a good swimmer, and the autopsy did not find any water in his lungs.  His companion was found to have evidence of blows to the upper body and head along with signs of strangulation.

Sounds pretty fishy to me.

Yes, he was eccentric.  As a child, he didn’t have a close relationship with his parents, and his childhood was both indulged and controlled.  (Does this sound like Michael Jackson?)  He wasn’t really king material, but he wasn’t swing from the chandeliers crazy either.

In our current day and age, we still have rich, eccentric people who create extravagant properties and may have a questionable grasp on reality, and some of them even look to rule.  As with Ludwig, one wonders if they’re really competent to run a country. But if we looked at the quirks and grasp of reality of some of the other folks who are ruling now, one might wonder, are they “crazy” too?