Most folks in the United States have heard of the Land of Lincoln, state motto of Illinois, where famed President Abe Lincoln had his roots.  But did you know there was a Sea of Lincoln?

Come Valentines Day, many guys find themselves in a quandary. If you have a wife or girlfriend, there is an expectation of dinner in a nice restaurant, or some other special treat that reflects your fealty and affection.  This may call for considerable advanced planning. Restaurants fill up their reservations weeks in advance. You might suggest cooking a fine repast for your honey instead, but chances are if you have that talent you’re already doing it on a semi-regular basis – what then would make Valentines Day special?

This year, when that couple-week-in-advance planning came around and a discussion of potential restaurants that still had reasonable reservation hours ensued, our excitement and anticipation reached a not so rousing level of “meh”.  It was time to consider alternatives.

My wife came up with the idea.  A trip to the coast! We do have a rather nice one, and the thought of a slightly longer trip with an overnight stay at some lovely venue punched all the romantic buttons. We picked our town, and a bit of research on Air B&B sites revealed a promising location.  The only caveat: at least two nights stay were required.

Darn.  Don’t ya just hate it when life forces you to do what you should be doing in the first place? Double the pleasure, two nights it was.

And the destination?  The Sea of Lincoln.  Or maybe it was the C of Lincoln.  Wait. I got it, it was Lincoln City, with an ocean on its doorstep.

Lincoln City is on the north-central Oregon coast. Long and skinny, it follows the coastline for 6-7 miles, with open beach nearly the entire span.  Oregon law mandates the ocean beaches are public, private development cannot close off sections.  If you were so minded you could walk the entire span, until you ran into the cliffs of headlands. 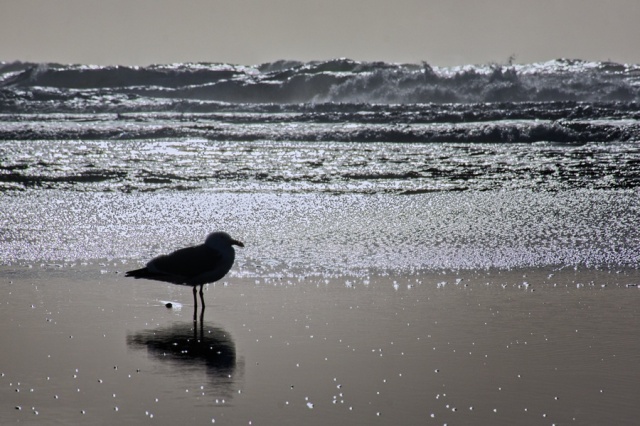 February weather on an Oregon beach is not an occasion for a bikini or speedo. While not frigid, that first afternoon the breeze was enough to wear a coat, zipped firmly.  Even the seagulls respected the rule, all wore a coat of feathers, none wore a bikini.

There were a few hotshots speeding around, practicing levitation and racing their reflections. But the cool temperatures prevailed, it was a dead heat.

An ocean view that’s strictly water and sand is monotonous.  I’m always partial to a foreground subject, something for the waves to meet up with to rock-and-roll.

There’s something about walking along the surf line. Perhaps it’s that white noise roar, cranked up by nature’s amplifier. Maybe it’s the game of tag, as the waves try to sneak in to soak your feet when you’re ogling a bird or a rock, making you jump and run. It could be all that fresh air and open space, freeing your mind from the claustrophobia of the city.  Whatever it is, I like it.

And as you wander down the beach, the winter sun looking brightly down on the waves and glassy beach from its southern vantage point, it pays from time to time to look to the north.

The glare is gone. Colors, once overcome by the strength of the sun’s stare reemerge. Our return hike, back up the coast featured the more subtle earth tones native to the Pacific Northwest.

Having absorbed enough wind for one hike, we returned to our lodgings for a break. Later, I tried to make something of the sunset.

Much of Lincoln City, including our digs sits atop cliffs overlooking the beach. We had good access via stairs and I got a sunburst halfway down.

But that was it. By the time I got to the beach and found a section with foreground structure, the sun had fallen behind a bank of clouds that foreshadowed the weather to come.  Any hint of dramatic color was but a dream.

As long as we’re dreaming…

Even if the sky was ho-hum, the rocks and evening surf played a misty tune.

Rejoining my bride, we picked a restaurant somewhat at random and enjoyed a nice Valentines meal. And we didn’t even need a reservation.

The following day we stuck to the south end. Hiking down to the spit at the entrance of Siletz Bay, we found a haul out for a gang of seals. 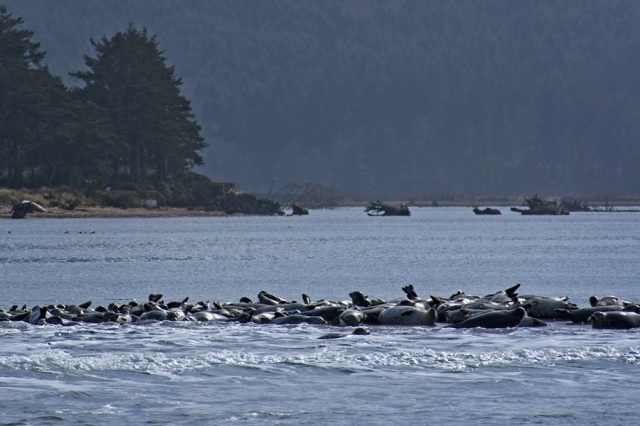 Seals weren’t the only critters congregating.

A driftwood log showed evidence of a long swim – a colony of acorn barnacles gave it a serious case of ocean acne.

Doesn’t this just make you want to make you go out there, surfboard in hand, to ride the waves?

Surf like that would chew me up and spit me out like low rent bubble gum. That water isn’t tropical either. It’s maybe upper 40’s F (7-8 C).

The rest of our time by the Sea of Lincoln was unremarkable – standard tourist stuff. Visiting glass shops, and a museum. Being served dinner by a fellow from Nepal. Watching Olympics.

But even with the standard tourist fare, the trip was much more memorable than yet another Valentines dinner at yet another Portland restaurant.  And isn’t that what counts?

40 thoughts on “Sea of Lincoln”