350 horses came thundering down the road.  Along with them came 50 of their Chinese riders, bent on invading new places and acquiring loot to bring back home.

They are not alone.  Other companies of riders are also invading.  More from China. Some from the land of the Ganges. Still more from the ancient lands of Arabia. Even those from the new world lands of the Americas joined the siege on this small area.  And to finalize the swarm, the nearby European tribes also came.

This diverse mob would seem likely to start a war – so many cultures, so many ideas of what is appropriate, so many with the desire to emulate Caesar.  Veni, Vidi, Vici – I came, I saw, I conquered. But the truth is more benign, and annoying.

They came to love the highlights of the city to death.

I was one of the invaders.

This crazy image came to me as my wife and I were trying to navigate through a throng of people near the medieval Chapel Bridge in Lucerne, Switzerland.  People of so many nationalities, races, and languages, all stuffed into this little area, all trying to make way or get that perfect picture.  Although the narrow streets were open for traffic, people still spilled from the sidewalks, looking for that special shopping memory or local cuisines to tell their friends about. A huge line of Chinese queued up outside the Bucherer Jewelry and Watch store, probably lured by rumors of a free souvenir Swiss spoon.   It was chaos, but it was not war.

I wondered how I would feel if such a crowd invaded my home town.  Would I feel overwhelmed?  Even as a visitor that feeling was not far away.

Would I be annoyed that I could not peacefully access the more notable points of my city?  I suspect I would know when the best times to go to those places would be, outside peak season, or earlier/later in the day when the hordes had dissipated to their hotels.  And I would know those secret places the tourists did not, unless some turncoat gave them inside information.

Would I even be interested?  Voodoo Donuts, a tourist destination in my hometown of Portland holds no interest for me, yet in tourist season the line goes around the block.  Portlanders go elsewhere for their fancy donuts.  Local secrets.

How would I deal?  For the Swiss, it seems the answer involves $$$$. Prices in Switzerland are high.  If you’re going to get invaded, go with the flow and milk it.  Who takes advantage of who?

But, like the other members of the invading horde, my favorite co-invader and I were here to see the sights, and for those with steeper climbs, conquer them.  Veni, vidi, vici. Here are a few of them:

The Kapellbrücke (literally, Chapel Bridge) is a covered wooden footbridge spanning diagonally across the Reuss River in the city of Lucerne in central Switzerland. Named after the nearby St. Peter’s Chapel, the bridge is unique since it contains a number of interior paintings dating back to the 17th century, although many of them were destroyed along with most of the centuries-old bridge in a 1993 fire. Subsequently restored, the Kapellbrücke is the oldest wooden covered bridge in Europe, as well as the world’s oldest surviving truss bridge. [1]

Years ago, while visiting Yosemite National Park in California I read a surprising factoid; 75% of the visitors never got more than a quarter mile away from their vehicles.  There may be some truth to that here as well.  Not far downriver there’s another bridge of similar vintage, the Spreuerbrücke.  It looks like the horde didn’t get the memo.

The first section of this bridge was constructed in the 13th century to connect the Mühlenplatz (Mill Place) on the right bank of the Reuss river with the mills in the middle of the river. The extension of the bridge to the left bank was completed only in 1408. This was the only bridge in Lucerne where it was allowed to dump chaff (in German: Spreu, therefore the name Spreuerbrücke) and leaves into the river, as it was the bridge farthest downriver. The bridge was destroyed by a flood in 1566 and then rebuilt, together with a granary as the bridge head called the Herrenkeller.  [2]

One of the towers includes a clock, installed in 1535. All of the accessible towers called for scaling several narrow flights of stairs, while dodging others who came to conquer the battlements and towers.  Fortunately, we were resisted by little more than steepness and shortness of breath. 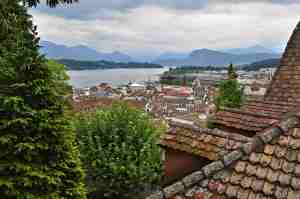 Once atop a tower, we were rewarded with views across the old town section of Lucerne, and onto the lake and mountains beyond.  After the final tower, we descended to the grounds and made our way across a field and over to the Spreuerbrücke.

Crossing over the Reuss to the South, we found a number of interesting buildings and shops, including this apothecary. 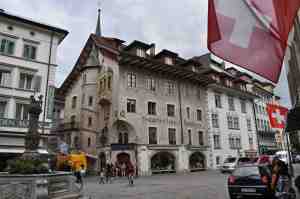 We didn’t spend much time on the South side, as it was getting to be time to be heading back to the camp of our group of invaders.  It had been a busy day, as we’d also made a return visit to the Lion of Lucerne, both a site and a sight not to be missed.  So, back over the Kapellbrücke and into the loci of tourist mayhem we went.  But we escaped with only slightly jangled nerves, and finished our walk alongside Lake Lucerne, where we enjoyed more placid scenes. 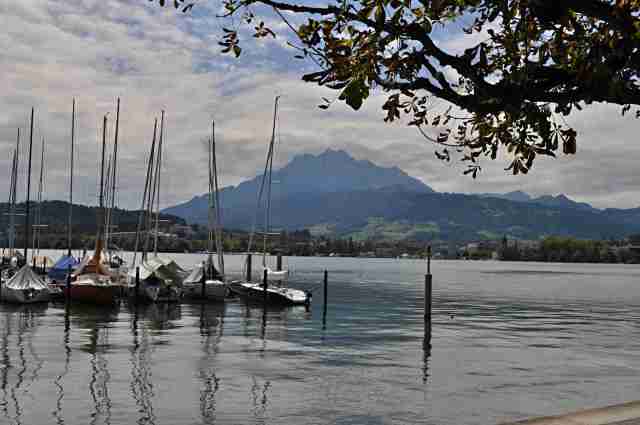 Along with many other invaders, we’d come to conquer the sights, sounds, and tastes of Lucerne.  But when we were done, one had to ask, did we conquer Lucerne, or did it conquer us?

9 thoughts on “The Horde Is Invading Again”