Who says you need drugs to get high?

It’s been a while, and a few side trips since the Gorge-ous Views Part 2 post, so a quick reminder of some of what we covered:

Multnomah Falls was one of the featured falls, and certainly the biggest one. It has two drops, the first at 542 feet, followed by a short river run with a 9 foot decline, then a 69 foot drop.

The view from the bottom is impressive, but you don’t have to quit there. There’s a trail that goes up to the bridge between the drops, where you can get a quick cool off break should you need it.

People come from far and wide to see Multnomah Falls, thinking it’s a waterfall when really it’s a gigantic atomizer.

If you don’t believe this, stand on the bridge for a minute or two. While some of the water going over the falls makes it to the drop pool, a fair amount eyeballs the drop and in absolute terror disintegrates into mist. The braver waters that hang in there for the full drop displace a lot of air, which gets pushy with the wussy mist and shoves it away from the cliff and towards the bridge. If you’re standing there, plan on being on the business end of a wet atomizer.

The trail section to the bridge is quite short. The wet cool down on the bridge is just a wake-up call for the main climb – the other 90% of the way to the top of the falls.

This section of the hike follows the slope of the gorge wall in a series of zig-zags.  Early on you can look back at the falls from a dryer perspective. 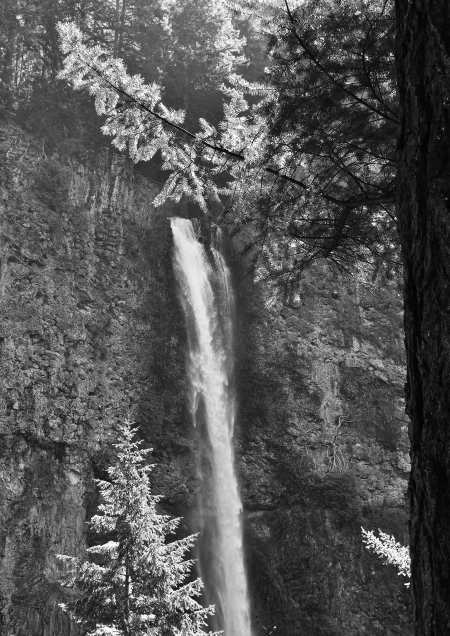 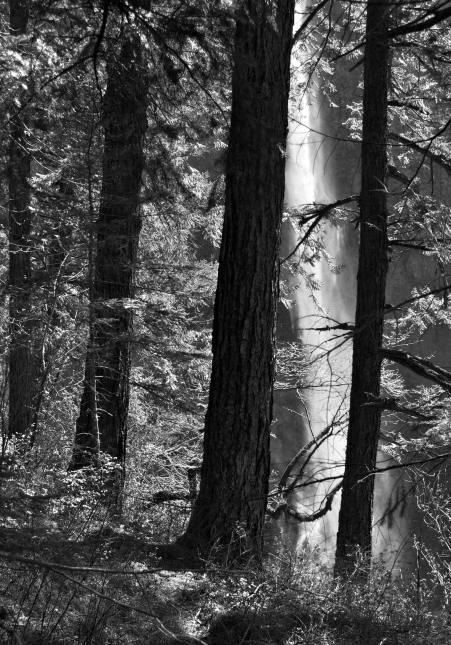 As you make your way up the slope the walk is mostly enclosed with trees, but on occasion you’re reminded you’re sharing the gorge with the mighty Columbia River. 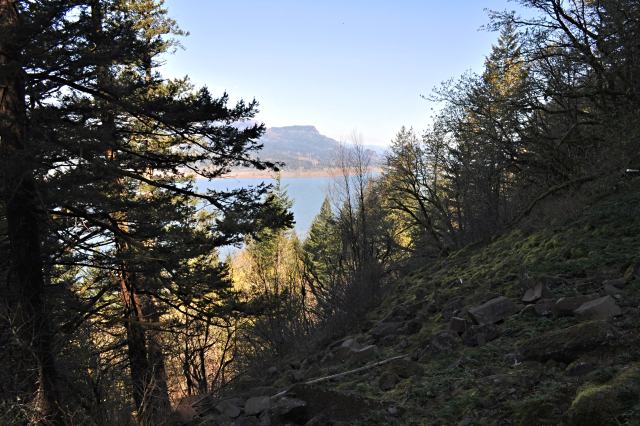 Back and forth, back and forth, climbing the slope. It was a lovely spring day, and despite making our hike on a Friday we had lots of company on the trail. Was it vacation season already, or was it spring “fever”/ playing hooky season?

Whatever the season, the climb up the slope runs a mile or so to the ridge top, then descends to a small valley that corrals the river. At a juncture of the descent, you can turn right and head to the falls overlook, or left to follow the Larch Mountain trail. I always start with the overlook – it’d be damn silly to climb all that way and not peer over the abyss.

Look back now at our opening picture. If you examine the right edge, that little thing down there is the bridge, and the top of the lower falls. Long way down, eh? No wonder some of that water blanches in terror and goes molecular when considering a fast trip to the bottom.

Do you feel high yet?

While the big drop is interesting and is the target of most of the crowd, my main interest runs the other direction. The river has to come from somewhere, and that somewhere is full of rapids, waterfalls, rills, and chills.

Returning the way we came we found the trail junction for Larch Mountain. This time we headed upriver. 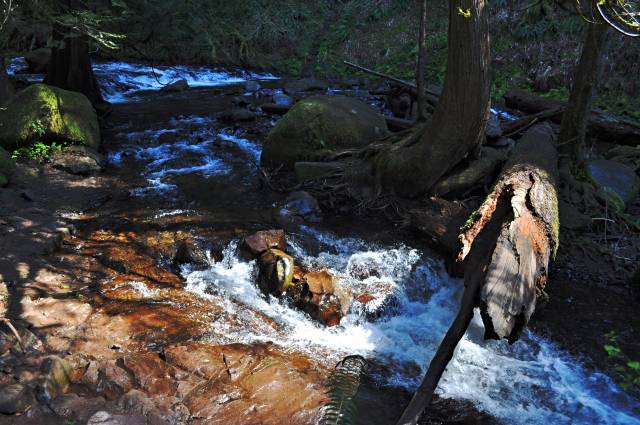 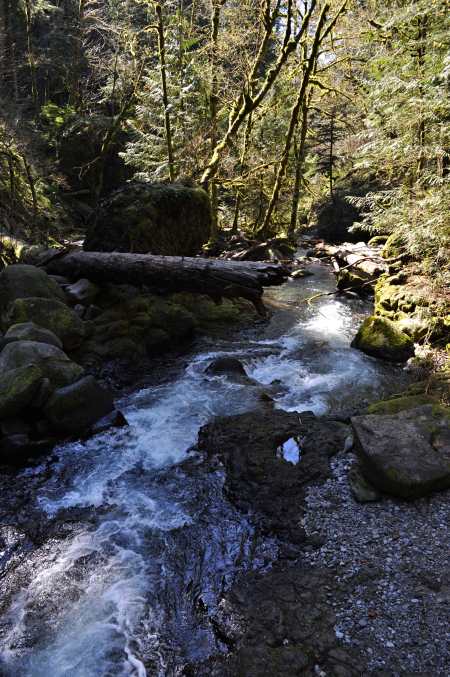 The stream is full of snags, rocks, channels, cascades, and a gentle babbling rush.

The enclosing canyon is covered in live trees, dead trees, moss, ferns, and enough miscellaneous flora to keep a botanist happy for years. 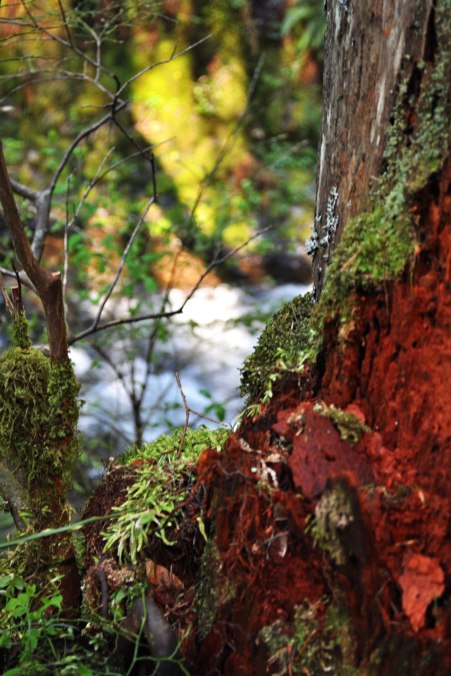 The canyon is formed of volcanic basalt. Despite drinking of the river for eons, rather than getting a hangover, it gets an overhang. 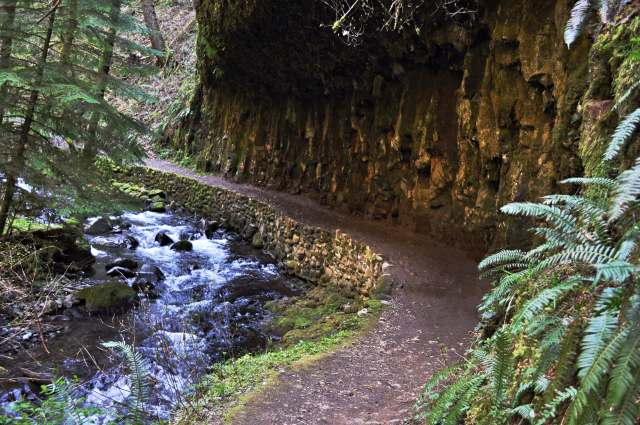 The secret that much of the mob at the bottom of Multnomah Falls and probably many of those at the top  don’t know is there are a couple more waterfalls further upriver. The first provides better viewing angles.

Depending on the time of year, even the canyon walls have small cascades, feeding lush greenery that would be the envy of any landscaped water feature.

The trail to Larch Mountain continues on for several more miles. I typically will turn around after the second of the upriver falls as the trail will only stick to the river for another half mile or so.  Then it heads even higher, on a grueling climb to the lookout at Larch Mountain.

The return is backtracking the trail down to the bottom of Multnomah Falls. Coming from a different direction gives the trail a different perspective, and going downhill exercises a different set of muscles.

When you’ve returned far enough to see the big falls again, you know you’re on the home stretch.

Hiking along streambeds and hanging out around waterfalls; they both generate a freshness of air and a natural high. It’s said that’s thanks to negative ions – molecules that have gained or lost an electrical charge due to being terrified of falling off a cliff. Whatever the cause, a day of fresh air, sunshine, and moving water provides a high that needs no other drug.

Of course, there’s always the next day when the sore muscles kick in, but that’s a different story.