It’s three hours into a walking tour in the old town section of the German town of Mainz, and we’re lost again.  My wife and I have tried to navigate our way to St. Stephan’s church, and we’ve already had the map out a half-dozen times.

The early part of our walk was more successful.  We headed off to see the open air market and the Dom, or main cathedral in the old town.  As it’s the largest building in the area it’s pretty easy to find. The inside’s pretty impressive too, which of course is the point…

There are a couple more highlights we were interested in chasing down: the Gutenberg museum and St. Stephan’s.  Breaking out the walking map, it appears the way to St. Stephan’s was on the opposite side of the Dom, so we began our meander.

Mainz has been around for a long time.  It was originally founded by the Roman army and called Mogontiacum, perhaps as early as 12 or 13 BC.  Over the years the Romans and various Germanic tribes tussled over the area, but since the maze that caused our confusion seemed to center around the Dom, we’ll figure that part of town was built in the 12th and 13th centuries around the church.

City planning back in those days probably had more to do with who could afford to acquire given chunks of land of various sizes and shapes and build on them than laying out a nice geometric grid.  As the layout evolved organically, when we went around the Dom to head off to St. Stephan’s, choosing which side street to take was a tad confusing, especially as some of them didn’t  appear on our walking map.  Our decision was delayed when we stumbled onto the Gutenberg museum.

Perhaps stumbled through the Gutenberg museum might be a better description.  By this time we were feeling the full effects of jet lag.  We’d arrived in Frankfurt that morning on the red-eye from Atlanta, and transferred to Mainz with the afternoon free for exploring.  Because of timing and the time difference between our origin in Portland Oregon and German time, sleeping on the red-eye defied attempts.   By the time we hit the Gutenberg we’d been awake nearly 24 hours.  The nice, quiet, low light displays in the museum also acted as an effective soporific.

BTW, for those for whom the concept of “book” or “printed hardcopy” is terribly old-fashioned and have no clue of who Gutenberg was, he’s the dude who introduced the printing press to Europe.  Before then all books were hand transcribed.  Check this blurb from Wikipedia:

Johannes Gensfleisch zur Laden zum Gutenberg(c. 1398 – February 3, 1468) was a German blacksmith, goldsmith, printer, and publisher who introduced printing to Europe. His introduction of mechanical movable type printing to Europe started the Printing Revolution and is widely regarded as the most important event of the modern period. It played a key role in the development of the Renaissance, Reformation, the Age of Enlightenment, and the Scientific revolution and laid the material basis for the modern knowledge-based economy and the spread of learning to the masses.

The museum showed a history and progression of printing presses in general, including the Asian methods and influences. There were also some samples of the old books, both hand transcribed and printed on the old presses.  Gutenberg started his revolution around 1439.

After exiting the museum, we still wanted to find St. Stephan’s.  The challenge of finding the right side streets remained, and due to the layout zigging and zagging was required.  Due to our zombie like state zigging and zagging were about all we could do, we just needed to match up the correct zigs and zags.

After going the wrong direction entirely and ending up at the river, we broke out the map (again), backtracked, and I finally resorted to the compass app on my smart phone.  Between that and more references to the walking map we finally found St. Stephan’s.

So what’s the big deal about St. Stephan’s that we went on such a grand, confused meander?  Ambience and stained glass windows by Marc Chagall. 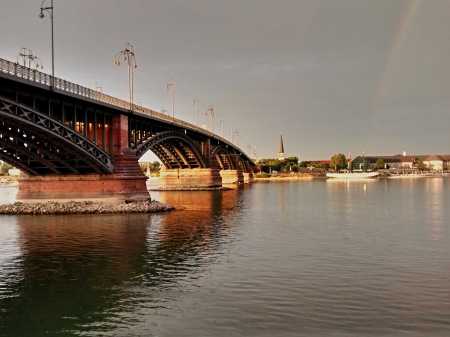 It was time to find our way back to the hotel, meet our guide and the folks we’d hang out with for the next 10 days, and have diner. Afterwards we walked along the riverside, joining the locals on the promenade. A rainbow provided a nice omen for a good trip.

As it turns out, Mainz is not German for maze.   It’s not even pronounced the same.  Until the twentieth century, Mainz was usually referred to in English as Mayence, which reflects the pronunciation.

But, if you go through the maze that is old Mainz, you may well end up amazed.

2 thoughts on “Is Mainz German For Maze?”