There is a town in Northern Ireland that has an identity crisis. It doesn’t know whether to call itself Derry or Londonderry.  But why?

After the dramatic sunset at Enniscrone, our next day took us east. We had one last stop before leaving the Republic of Ireland, a scenic hilltop called the Grianan of Aileach.

Atop the hill, we found a large stone fort. The exterior walls were in a ring 15 feet high, and once entering through a small gateway we found the interior containing terraced stone levels leading to the top of the walls. A small open field lay within, which presumably held barracks, storage, or other housing at the time of its building in the sixth or seventh century. Reconstruction occurred in the 1870s.

Regardless of the history, the fort had a timeless solidity and the view was splendid, leading downhill, and on to Derry/Londonderry.

(Note: I may get some of the next bit wrong.  To any British or Irish readers, if I screwed up, my apologies, and feel free to correct me in the comments.)

I suppose it’s possible that when folks think of that big green island called Ireland, they assume it’s all the same country.  In fact, it is not.

Most of the island, and all of my Ireland posts so far, fall into the independent Republic of Ireland. A smaller, roughly circular segment taking a bite out of the northeast corner is Northern Ireland, which in turn is one of the country states that make up the United Kingdom (AKA the British). England, Scotland, and Wales fill out the UK.  Northern Ireland is a historical accident, driven by the Brits trying to control Ireland, but not being entirely successful.

Part of this attempt included colonization, especially in the north, and many of the colonists followed the Protestant religion. Most of the resident Irish followed the Catholic religion. As a result there was a perfect storm, both political and religious, that has historically caused conflict in Northern Ireland and drives why Northern Ireland is a separate political entity from the Republic of Ireland. 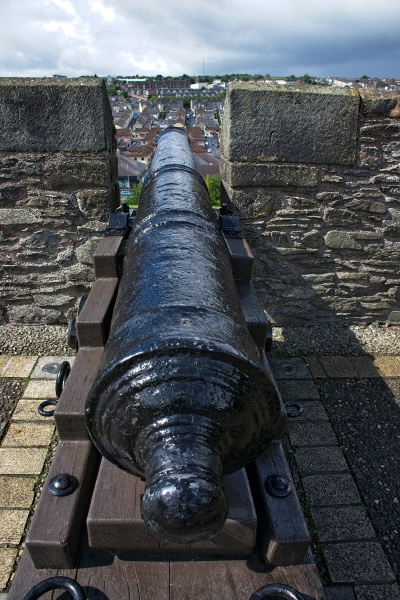 Although the hostilities that resulted in the Republic of Ireland gaining its independence occurred in the 1920s, they go way back. Consider the name Londonderry.  Traditionally the name of the burg is Derry (Doire, when first established).  In 1623, as an offshoot of colonization, they renamed the town Londonderry in honor of the London based livery companies that backed it. 500 years later this is still controversial, even though the town exists on the UK side of the border.  Officially it’s Londonderry, but most of the locals call it Derry (including the city council.)

Fast forward from the 20s to 1969.  Although the nationalists (folks who’d like the whole of Ireland to be united) were in the majority, the unionists (folks loyal to the United Kingdom) were in control, thanks to gerrymandering and what Americans would call “the old boy network.”  Unemployment and overcrowding in nationalist areas led to disillusionment, marches, and a massive riot called the Battle of Bogside. This event triggered an ongoing problem that was called “the Troubles”, with the IRA and the British Army in the middle of it.  Derry/Londonderry, being on the UK side of the border but having a nationalist majority was a powder keg.  Many folks think Belfast was the center point of the Troubles.  But they had simply migrated from Derry/Londonderry over time, and by the early 1990s Belfast had taken center stage. 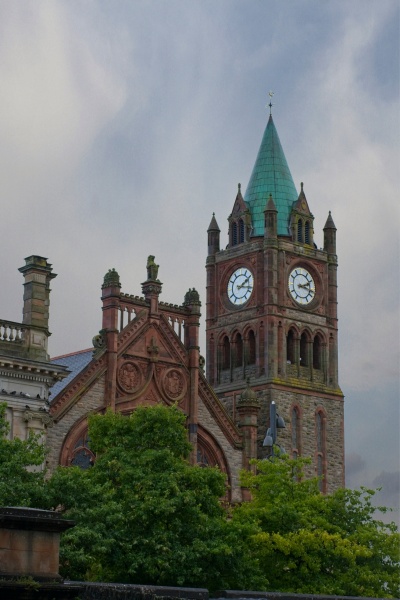 It’s not all bad news. Eventually, the IRA and the Brits made peace.  New generations of kids are being born, and the segregation that so deeply separated the predominantly Catholic nationalists from the predominantly Protestant unionists isn’t always as strictly enforced.  Religious convictions aren’t as strong and close-minded. Folks tired of the violence, and while they love their country, they love their kids more and want them to be safe.

Areas that used to be battlegrounds, or somewhere you wouldn’t dare go at night are now touristy.

This is the pipe organ at city hall, AKA the Guildhall.  City hall was a regular target during the Troubles, and has since had extensive renovations.

It’s not all rainbows and unicorns.  Politicians being politicians, stubbornness and ideology still build walls.  Northern Ireland’s Assembly hasn’t met since January 2017 due to a snit fit between parties.  (And we thought the US Congress was a mess.)

Hanging over it all, Brexit. Currently, the only thing that flags the border between the Republic of Ireland and Northern Ireland is a Welcome to Ireland sign with the speed limit in miles per hour (60) instead of kilometers per hour.  You don’t even have to slow down.  Brexit could change this, add border stops, create division.  They’ve discussed a “soft Brexit”, but it doesn’t seem to go anywhere.  Most of the people don’t want a hard border, but the politicians are more enamored of their ideology and egos than the overall good of the people. 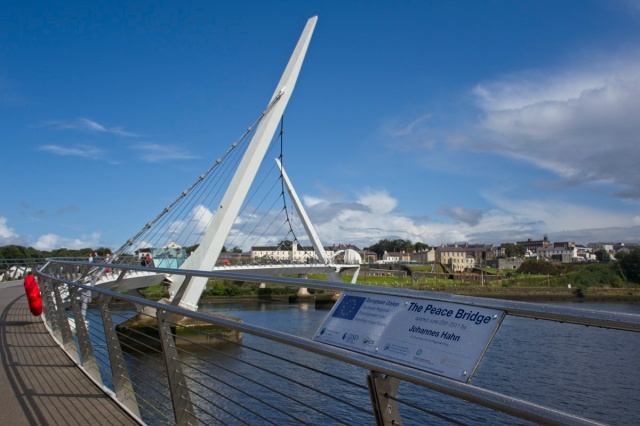 Still, they’ve resolved bigger problems. People used to kill each other, now they’re merely acting like spoiled brats.  “If I can’t win everything, I won’t play.”  Seems like, if the grown-ups stand up and say enough is enough (and vote the hardcore ideologues, demagogues, and other riff-raff out), they can once again build bridges, and peace can replace the bad attitudes.

We can only hope.

38 thoughts on “Derry or Londonderry?”