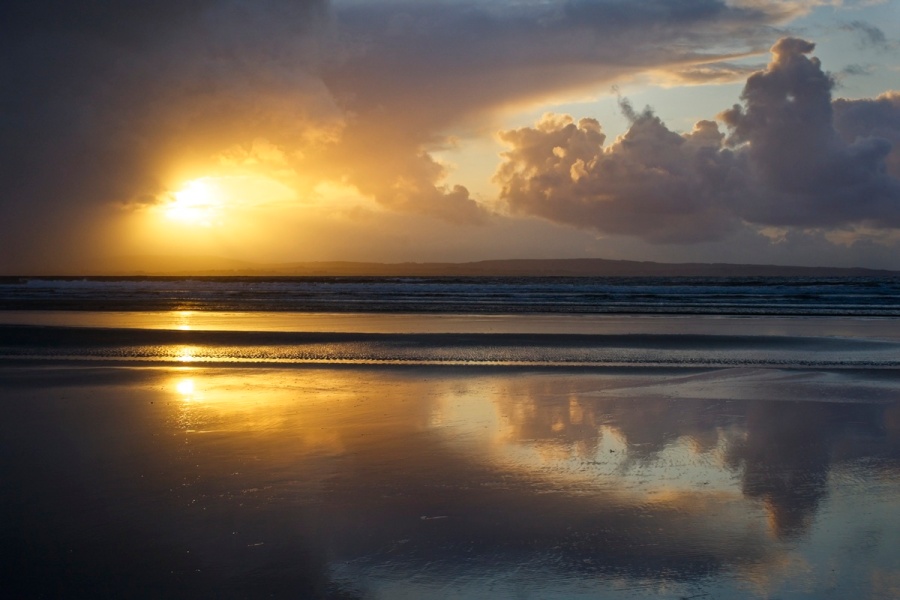 The chill wind blew in off the North Sea, pushing in clouds and rain showers, and most tourists off the beach.  Their loss, the skies were full of drama.

It had been mostly a travel day.  Making the run from Killarney to Enniscrone we’d bumped in and out of patches of rain and wind.  From time to time we’d make a pre-planned stop, saving our guide the embarrassing problem of dealing with, “teacher, teacher, I’ve got to go!” 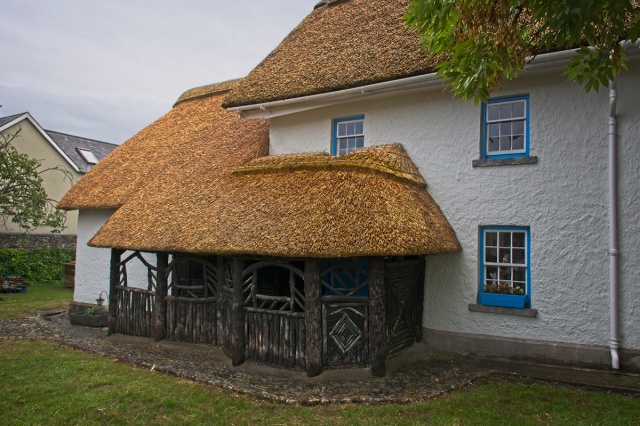 In Adell, there was a small patch of houses/restaurants built the old-fashioned way – with thatched roofs. Thatching is a dying art. A skill that was once commonplace has fewer and fewer practitioners.  It’s both a skill that is being forgotten and an art that has various styles – it is said an expert can look at a roof and tell who thatched it, or at least where they’re from.

Moving onto Galway, the goal was lunch and a short walkabout. My wife is gluten sensitive, it’s often difficult to find a place that serves interesting gluten-free fare.  Sandwiches?  Nope.  Pasta?  Sorry.  Sauces, gravies, things that might use wheat flour as a thickener? No can do.  After wandering a bit we finally found an Asian place that served a dish with a base of rice noodles.  At least many of the restaurants were upfront about what dishes contained allergens.

After lunch, we found the Spanish Arch and had a quick peek into a regional museum near the pier, and an even quicker jaunt downtown to Eyre Square.  Technically renamed “John F Kennedy Square” in 1965, the president had spoken there only a few months before his assassination in November 1963.  But historically it’s been Eyre Square, named after the fellow who donated the land back in 1710, and for most locals Eyre Square it remains.

Jane Eyre had nothing to do with it.

The sculpture honored the Galway Hookers.

No, not those kinds of hookers. 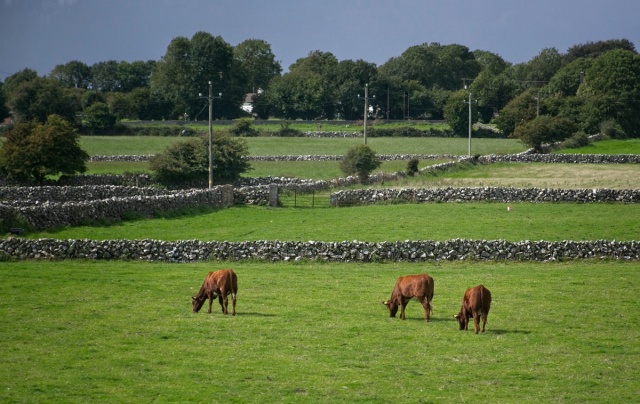 As we drove further into the northwest, we began to see the famous Irish rock fences. 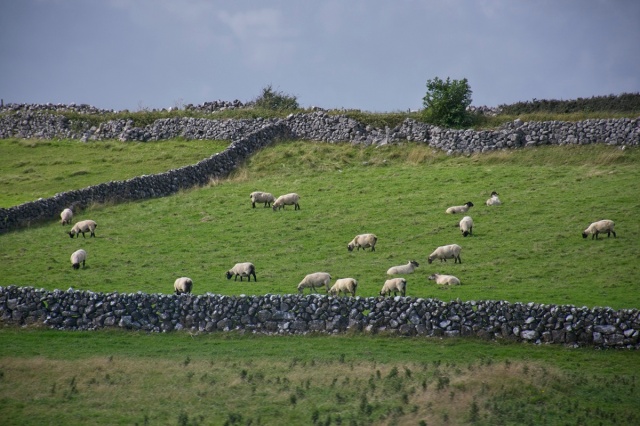 Dry stone construction, they don’t use mortar to secure the rocks. Each rock is cleared from the fields and carefully stacked; somehow they seem to stand the test of time.  I assume the farmers do basic maintenance, but like thatching, building these rock fences is becoming a lost art.

Our target this day was Enniscrone.  I knew this was to be the only day on the trip we’d have ocean access for the sunset, and I had high hopes the weather would cooperate. 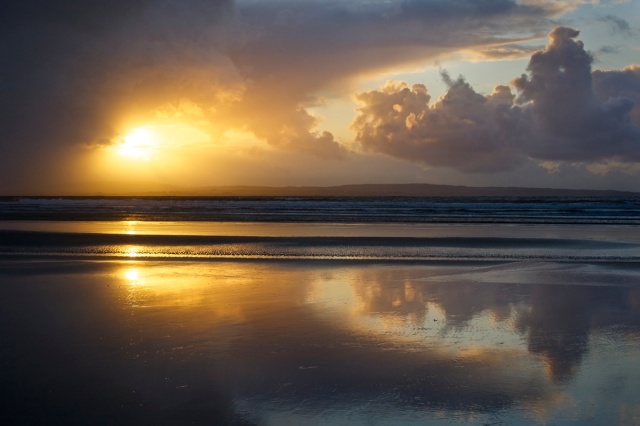 As we sat for dinner, shafts of sunlight blasting through the west-facing windows, I worried we would not finish in time. 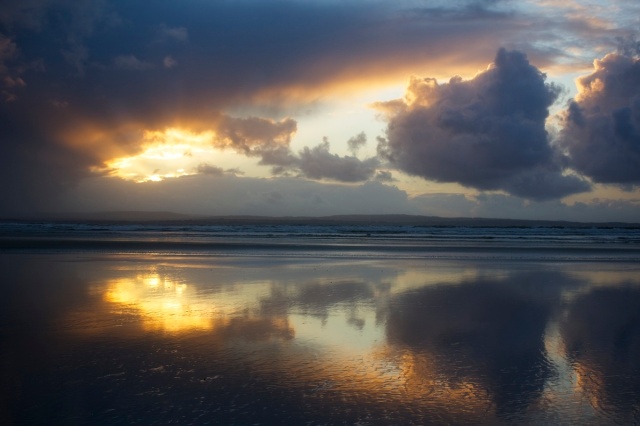 But we did.  My wife and I wasted no time heading for the beach.   With the wind blasting in our faces and clouds rolling in, just enough gaps remained in the cloud cover to provide a deep breath of nature in its grandeur.  It was electric, but without lightning. 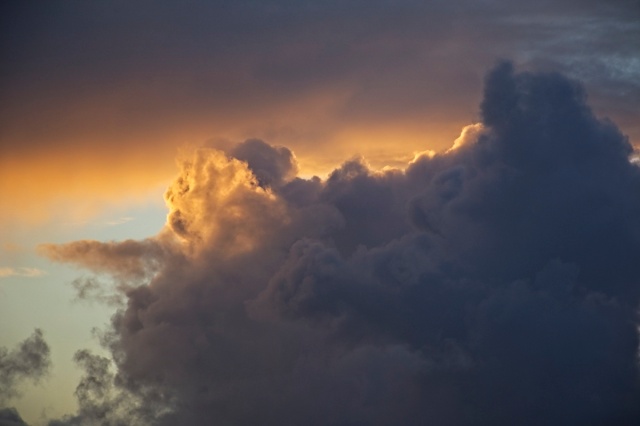 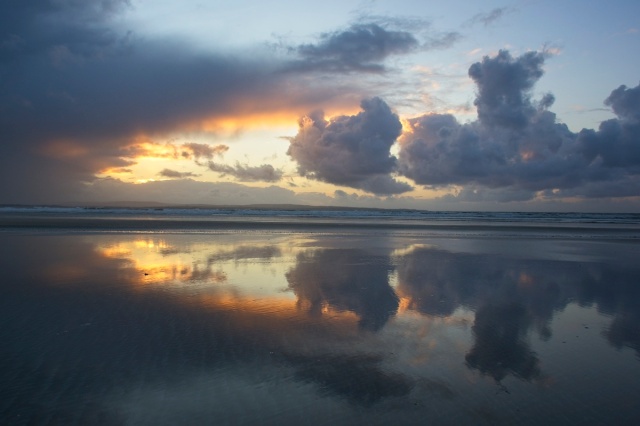 So ended the day at Enniscrone.  The very name of the place invokes Ireland and the sea, the mists of selkies and other fables, and the magic of a sunset transforming a cold grey blustery evening into a thing of profound beauty.

43 thoughts on “Days End at Enniscrone”