Hanging upside down and backward, 90 feet of open air beneath my head, I wondered how I would get out of this one.

Folks may wonder, when I’m telling of this adventure or that or when I try to sneak in a little humor if it’s on the up and up or if I’m just full of it.  Maybe I am, maybe I’m not,  but in this post you have my word, it will be full of Blarney.

While I’m sure all my regular readers have vocabularies suitable for populating dictionaries, and most of my newer visitors have a knowledge of euphemisms that would inspire a politician, it may be that there is someone unfamiliar with the term “full of blarney.”  It all goes back to a magical stone in an otherwise mundane wall in the ruins of a castle in Ireland.

To some, this magical item is known as The Stone of Eloquence, but to most of the world it’s called the Blarney Stone (sometimes abbreviated as BS.) The story is, should you dare to assume the somewhat risky position it takes to approach the stone and give it a big fat kiss, you will be granted the gift of eloquence.  As fate would have it, my travels brought me to the castle.

I had to give the stone a smooch. It’d be silly to pass on the chance, wouldn’t it?  At least now if someone accuses me of being full of blarney I have an excuse.

To get to the stone we had to scale a tower and pass certain welcoming areas. 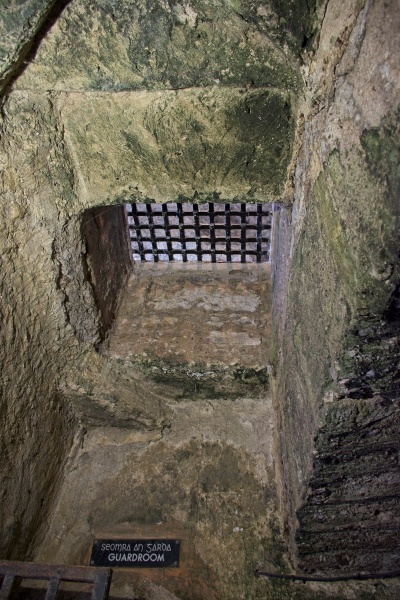 Back in the day, some guests were less welcome than others.  In this room the ceiling had a grating, presumably for the dumping of hot oil.

Up we wound, along a stone enclosed spiral staircase. Placards told us they built the stairs steep and narrow on purpose; too narrow for more than one abreast to ascend or for any real sword work.

As we climbed, we passed small rooms with a slotted window. For some the wall was too thick, the frame too deep for a good photo.  For others, I could reach out to find a better view. 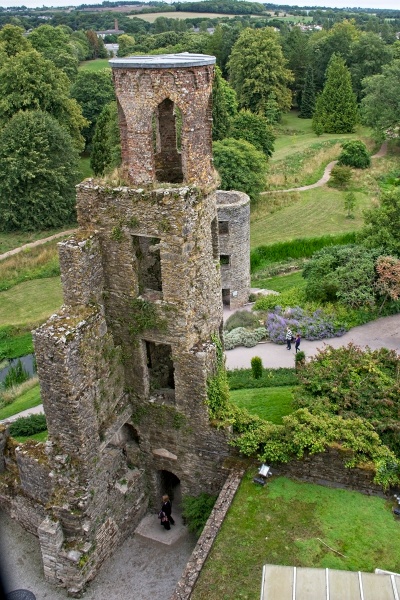 At last, we reached the summit. Railings guarded the inside edge of the battlements, protecting from a long drop through were floors used to be. It also gave us our first view for the process of kissing the Blarney Stone.

Along one section of the wall, a gap, maybe 15 inches by 4 feet, opened up between the battlements walk and the outer wall. Adjacent to the gap, padding was laid out, and an attendant sat on one side to walk supplicants through the process and hang onto them when they were at greatest risk.  After watching the process, including a few who got to the critical moment and bailed out, it was my turn.

I removed my glasses, change from pockets, and camera bag,  and seeking the gift of gab laid down on the padded surface to begin my transformation.

A modern addition to the process was a pair of parallel bars attached to the wall. I grabbed them and pulled myself into the gap.  Head and shoulders upside down, facing the wall vertically,  and dangling over a 90-foot drop.  It was quite disorienting.

The moment of truth.  The Stone was inches from my nose.  I gave it a quick smooch, and waited for my new powers of glib.

There are many legends behind the power of the stone. The most elaborate concerns the queen of the fairies, who was the daughter of a leading druid. It seems she fell in love with a gallant young chieftain, who was killed in battle.  She found his body washed up against a stone on the river Lee.  His blood, along with her tears and kisses were absorbed into the stone, and her magic along with it.  Henceforth, kissing the stone triggered the magic of the fairy queen.

The first “erudite” thing that popped into my head after my moment with the fairy magic, when trying to get back up again?  “Oh shit, this isn’t as easy as sliding down there in the first place.”

Fortunately, after reaching higher on the bars, and possibly with an assist from the attendant, I was able to extract myself, collect my belongings and my wits, and move on.

It could be that my wife partook more deeply of the fairy enchantment.  As we were moving on, she commented that she had a salty taste on her lips.  After a pause, that was followed by, “maybe some of the people are giving it a French kiss!”

Was I transformed? Have I shed my usual quiet nature? Am I more full of the powers of the BS than before?

I don’t really think so.  But that may be for others to decide.

After descending a less crowded set of back stairs, we went on the explore the rest of the grounds.  Or at least part of them, the grounds are large and you could spend hours exploring.  We found a lower battlement wall, a garden of poisonous plants (probably not that poisonous) and a few trails, one leading to a sculpture garden.

There were other sculptures, other gardens, other trails, even a lake and a mansion the current owners live in – all of which we did not have time for.  This is how it goes on a guided tour. Skim and move on.  Walk the trail, but keep an eye on the clock.  Stop and enjoy, but not too long.  Such is the plight of modern life, a deluge of instant gratification, a breeding ground for ADHD and fear of missing out, an inability to relax and smell the roses.

Could I have missed out on kissing the Blarney Stone? I suppose I could have, most of the world has without impact.  But I’m glad I didn’t.  I think the real gift of gab from letting it hang out and romancing the stone is more from bragging rights than from any real gain of eloquence.  Who’s to say it didn’t all start on a dare, one bored guardsman to another, to kiss the stone.  And after succeeding, said guardsman wouldn’t shut up about his deed, and those who suffered him said he’d gained the gift of gab.

And somehow, after all these years, the tradition of that dare, that gift has led all you fine readers to wend your way to the bottom of this piece and saying, “I guess there is something to the Blarney Stone – listen to him prattle on.”

34 thoughts on “Full of Blarney”