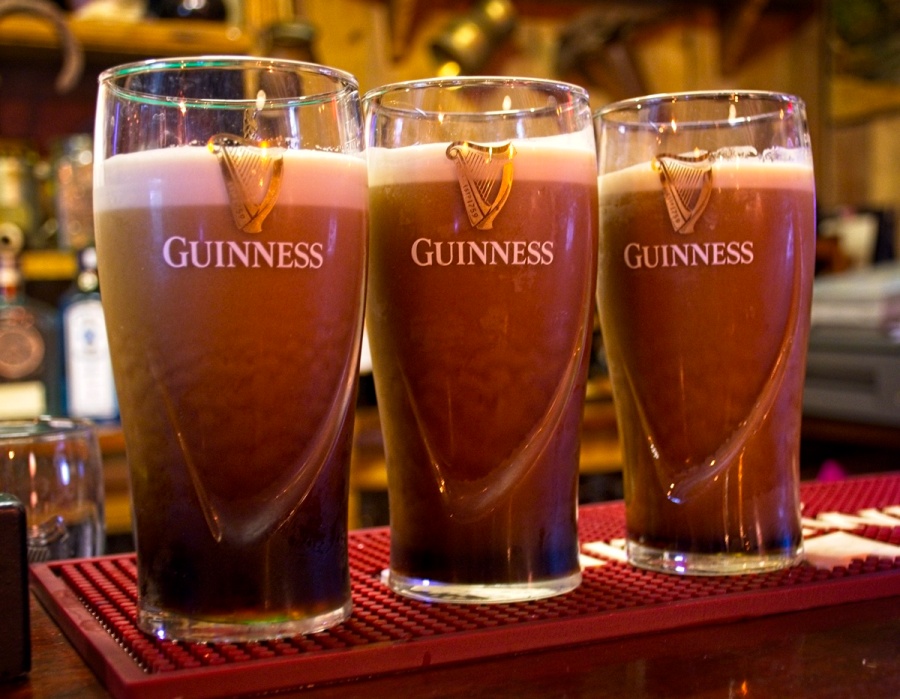 The Barmaid set the pint of Guinness stout in front of me, tiny tan bubbles of nitrogen still cascading upward through its dark brown liquid.  The last time I’d tasted one, almost 40 years earlier, I thought it vile.  Dreading strong, coffee-like flavors, I feared the pending attack on my taste buds.

“Let’s go have some craic!”

Despite the sound of it, this is not the battle cry of Irish drug addicts looking to score cocaine. Craic is an Irish term that means “fun”.

It’s not an exact definition.  It attempts to call up that feeling of comradery, joy, cracking jokes, laughing, gossiping, maybe having a drink or three, and generally having a good time with your friends.  The traditional place for this is an Irish pub.

This particular pub is on the outskirts of Waterford, Ireland.  It’s been around for a few years, certainly long enough to see the evolution of Irish pubs.  Established in 1705, it’s been owned by the current family since 1857. Our group was looking to have a craic in the loft of the old bar.

Back in the days before absurdly large cities, before the internet, before texting and social media, before even the telephone, people still looked for ways to have the craic. The local pub set the stage.

It was a gathering place to meet friends, acquaintances, and passers-through.  Did you want to know the latest?  Go to the pub.  Ever wonder about the source of that stereotype of the barman with the kind ear who seems to know everybody’s business?

But even with all that, many publicans needed a second job to make ends meet.  Although they were a central meeting point, folks had their own lives to deal with, and the pub may not be right next door. Trying to survive solely on Friday night craic (or whenever they did it) and the occasional drop in may not be enough to pay the bills.  So, they’d have a second job: raising sheep, local grocery and general store, burying the dead.

Yep, undertaker and pub owner was a regular thing.  Some of it may have been for convenience. The pub probably had a cool cellar for storage of beer – it could also keep a body cool before it was interred.   It’s likely there’d be a wake on the premises with plenty of spirits served, in one way or another.  And, of course, as the guy behind the bar, chances are the pub owner had already gotten the deceased pickled a time or two.

I don’t think our host at Jack Meade’s had quite gone to those depths.  His routine was more as an entertainer; telling stories about the history of his pub and pubs in general, dropping a joke here and there, and singing songs.

Singing and music seem to be ingrained into the Irish psyche.  Perhaps it’s because they were often obliged to make their own entertainment.  Maybe it’s due to inhibitions loosened by a few glasses of beer or whisky.  Whatever is behind it, it must be part of that mysterious feeling fed by craic.  And sooner or later, somebody’s going to end up singing “Oh Danny Boy”.

But first, they need to oil those vocal cords.  And what dark liquid lubricant might help with that?

While ordering a Guinness in a typical Irish pub will result in a dark, malty beverage, Guinness is actually a brand rather than a beer style.  Guinness makes several variations of its stout, as well as newer styles like IPA and Blonde.

The black stuff started life as a Porter, a style named due to its popularity with London’s street and river porters.  Arthur Guinness started his Dublin brewery in 1759, signing a 9000-year lease at 45 British Pounds per year, a rate the brewery still pays for its large site. The recipe has evolved over the years.

Pouring a Guinness is an art form.  Getting that head just right, with the bubbles still settling requires technique.  But before we talk about the art of pouring Guinness, an aside.  What’s the big deal about the bubbles?

Most draft beer and almost all bottled and canned beer get their fizz and head from carbon dioxide.  This gas has larger bubbles and is more easily absorbed into solution.  Nitrogen bubbles are much smaller and don’t absorb into solution as easily.  Because the bubbles are so much smaller, the mouthfeel is much smoother.  Some bars will offer pours from a nitrogen beer engine, i.e. a tap that forces nitrogen into the beer at the time it is being poured.  For cans and bottles, they’ve created a “widget” – a small plastic object with an even smaller hole in it that can absorb pressurized nitrogen injected at canning time.  When the container is opened, it releases the absorbed nitrogen from the widget.  Guinness is partially carbonated with carbon dioxide, but its real character comes from being poured with nitrogen being injected.

So, the steps for pouring a Guinness:

But did I enjoy the flavor?  When I first tasted one back in 1980, I could barely finish it, I gagged it down to be polite.  It tasted strongly of coffee,  and I hate coffee.  (Ok, so I’m a little weird.)  This time, first sip, “hmmm, that’s not half bad.”  As I got further into it, that evolved to “hey, I really like this stuff!”  I wasn’t picking up any coffee flavors, it was smooth and well balanced.  Sure, there was a hint of roastiness, but this was supposed to be a stout – that’s to be expected.  Stouts I’ve tried back home, and I don’t try many due to the coffee thing, tend to have much stronger flavors.  This one tasted more like a mild Porter.

Other folks I’ve talked to have had similar experiences.  The version of Guinness they’ve tasted before, outside Ireland wasn’t nearly as tasty.  I suspect that’s because Guinness has an “Extra Stout” version they use for export.  Maybe my first taste, way back when, was of the extra stout variety.  Maybe my palate has evolved;  since that first taste of Guinness I’ve tasted hundreds of varieties and variations on beer, it’s kind of a hobby.

In any case, I went from apprehensive to appreciative, and for the duration of the trip when I looked to have the craic with my fellow travelers, it might well be augmented with a Guinness.

Special thanks to the barmaid (Jane?) at Jack Meade’s for letting me photograph the art of pouring a Guinness.

45 thoughts on “Irish Pubs and the Art of Guinness”