For much of my adult life, I was a Grinch when it came to Christmas.   One day that changed.

I did not come to embrace Grinchhood on purpose, it just worked out that way.  At the age of 20, I abandoned the bosom of my family in Minnesota and moved to Oregon.  It was not due to rejection, conflict, or the escape of a black sheep – it was more prosaic than that.   My sibs had all flown the nest and friends had started families, my time was my own and an icy specter was looming.

I used to be a typical tough Minnesota kid, anti-freeze for blood, sneering at snowstorms that dropped less than a foot, and ready to wander outside with a surprising lack of layers. Then, I became old enough to drive and turned into a wuss.  No longer did I have to brave the elements for more than a few moments: snow creeping over my unbooted shoes, below zero temps freezing icicles into my mustache during walks to school or work, sidewalks of packed snow and ice providing near skating rink conditions, wind chills approaching death-defying depths.  Balancing the option of onerous winters but occasionally seeing family or friends against starting anew in a somewhat warmer but friendless place, I went to a place that was warmer to the face but colder to the soul.

The next 20 years were often solitary affairs. True, I made new friends and found things to occupy myself, but still, holidays were lonely.  My friends had their own families to hang out with.  I effectively became a holiday orphan, left to my own devices.  My parents did what they could, sending care packages with cookies and a few gifts, including on occasion ornaments I could put on a tree.

Of course, after a few years of Christmas alone I’d devolved into full Grinch mode.

Ok, maybe not full Grinch mode.  I didn’t steal anyone’s gifts, or try to rain on their Christmas parade.  But Christmas was mostly just a day off from work.  About the only concession I’d make to the holiday might be to watch “White Christmas” or “It’s A Wonderful Life” on the tube.

One might get the impression I’d become a hermit, holed up in a man cave, shunning company and spending my free time contemplating the strand count of lint in my navel. This wasn’t quite the case.

In my late 30’s, feeling the need to extend my social life, I joined a singles club – more of a group activity organization than a dating service, but all singles just the same.  And if we happened to meet someone during an event or two that struck our fancy, it certainly wasn’t against the rules to ask for a date.

I admit, for the first few years it was nearly all group activities and very few dates for me, but in time I met a certain someone that had a certain resonance.  One date led to another, and becoming a couple, and eventually marriage.

But at the end of our first year together Christmas rolled around.  It was a test: was the Grinch still grinchy?  Adding to the quandary – my new lady was a big Christmas fan.

No Christmas Tree became Oh Christmas Tree.  She had Christmas ornaments and decorations by the boxes full.  The halls and mantles were decked with Nutcrackers. Lights were strung, blinking their holiday morse. Families were met, parties attended, it all seemed a little surreal.

But one little event sealed the deal, suggested that this union was meant to be.  After placing various ornaments from one of her many boxes, one came out that had that special resonance – a little Miss Snowwoman, with top hat, sash, and a dainty set of eyelashes.

The Grinch looked upon the scene, and what holiday ice had lingered in his heart melted away – off to a special drawer he went.  Soon it came out, that secret stash of ornaments from his parents. And on top, Mr. Snowman – a perfect match.  Top hat, sash, and a smile for his dainty lashed companion. Together, on the tree they went, hand in hand, and all the Whos in Whoville broke into song. 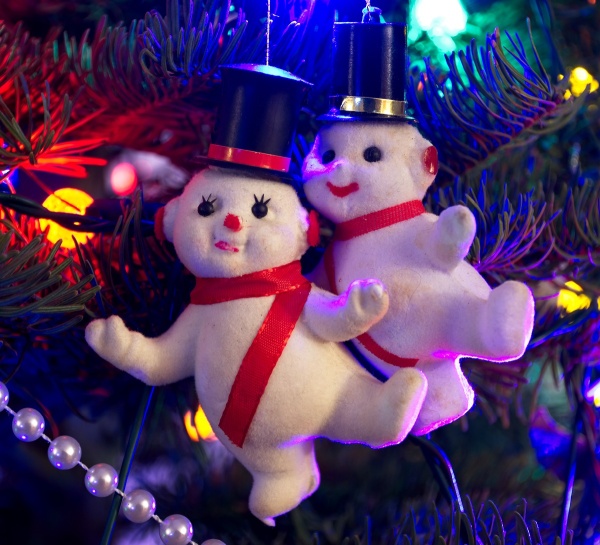 Seventeen years later we still celebrate that first December date. And for each of those years, Mr. and Mrs. Snowman have come out of hibernation and found a little niche on the Christmas tree, close together, to set the tone for the year to come.

May you all have a Merry Christmas and a Very Happy New Year.