Some guys get their jollies from new power tools. Others, from a new set of golf clubs or a drone to fly around the neighborhood. We all, with any luck, have interests outside of putting food on the table and paying the bills, and often those interests have “toys” that support them.

I’m a guy with a lot of interests. Sometimes they’re intangible, like a curiosity about how the universe works, or in a good work of fiction, or what the world looks like three countries over. But I also have more gear intensive interests, and have recently acquired some new toys to support my photography hobby.

(Warning: this post contains a fair bit of photography jargon. For those who’s eyes glaze over simply reading the term “photography jargon”, feel free to skip forward to the pretty pictures.)

I mentioned the primary piece of new gear a few posts back – I got a new DSLR camera. The old one still worked well, but it was 8 years old, an eternity in camera technology. As I was due to level up to the next class of camera, I made the jump from an entry level Nikon D5000 to a “prosumer” D7200.  Not pro level, but a significant step up. The kit lens was also an upgrade, from an 18-55 zoom to an 18-140 zoom. I started showing results from the new camera in the “Snow Patrol” post.

Since then I’ve been gradually upgrading more gear: a new 70-300 telephoto lens, a used 12-24 super wide angle lens, a travel tripod, filters, and a carrying case.  All I needed was a break from the near constant recent rain to go out and play with the new toys.

You might argue that the 18 end on the 18-140 is plenty wide, and it does take in a lot of turf. But for those who relate those focal length numbers to the old days of 35mm film cameras, there’s a caveat.

Digital cameras use sensors rather than film, and the size of the sensor impacts on how much of an image you get from a lens. Most pro level DSLRs have “full frame” sensors, i.e. the sensor will see the same results as the old 35mm cameras.  The D7200 has a smaller sensor and falls into the “crop sensor” category. What this means is, as the sensor only sees part of what the lens projects, it’s effectively cropping the outside edges of the frame and magnifying the image. For the D7200 the magnification factor is 1.5, so that 18-140 zoom become equivalent to a 24-210 zoom from a full frame perspective.

The second part of the story is about lens quality. The 12-24 (effectively 18-36) lens is a pro level lens whereas the 18-140 is simply average – a good quality lower end lens. That pro level quality is also why I got a used one, a new one would cost as much as the new camera and the 18-140 combined. Hopefully, it’s used status will not result in degraded images. Here are some results. 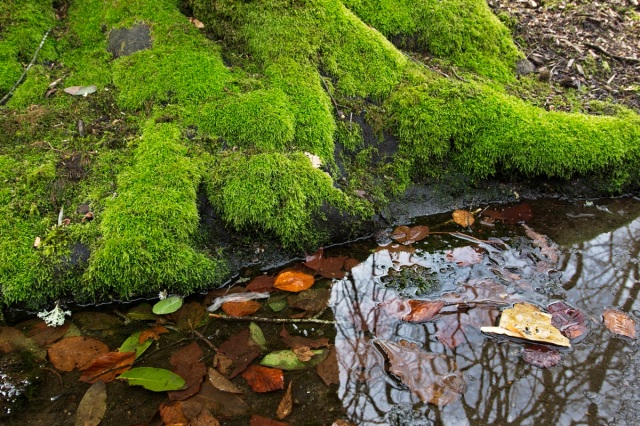 Ok, so it’s not normal to use a super wide for flowers unless you didn’t have enough elbow room to back up, but hey, it was a new toy, I had to try it – right?

A more likely target is big landscapes, the real reason I got it. But I also picked up a new tripod, in part with the idea I could start doing panoramas.  In this case I took it to an extreme, combining the widest end of the super wide with panorama stitching (multiple pictures combined in a computer.)  Maybe too extreme, it was hard to get past the distortion. I subsequently learned from wiser heads I shouldn’t go below 18mm for panoramas on a crop sensor camera.

That tripod should come in useful later too, for long exposures after dark or with special filters for effects.

More conventional shots from the super wide will be featured in the next post.

One last shot from the super wide, with a spin. The weather didn’t suddenly turn wintery – I converted this shot to black and white. Looks kind of old-timey, eh?

The recent new toys were not limited to hardware, I picked up and have been studying new photo editing software too. It turns out there’s a Portland-based company that puts out a nice product called On1 Photo RAW – I’ve used it on most of these images. Historically I’d used Paint Shop Pro and its companion Aftershot Pro, but it was time to upgrade there too, but not all the way to the pricier Adobe Lightroom/Photoshop tools. Having said that, for this B/W conversion I used an older tool called Silver Efex Pro 2, part of a “Nik” toolset from Google. They don’t support it anymore, but the good news is it’s now free. It works standalone or as a plug-in for the On1 and Adobe tools. Those tools do B/W conversions too, but not as well.

While the 12-24 wide angle was the main new toy that afternoon, I had the 18-140 mid range zoom handy as well. It does flowers too…

I scored the new 70-300 telephoto as part of a package deal with the camera, saving me a couple hundred dollars.  I did have a 55-200 zoom already, but was looking to extend the range for birds, other critters, and the occasional landscape shot. Remember that crop-sensor factor (1.5)? It turns the 70-300 into a 105-450 telephoto – that should do the trick.  It’s not the heavy high-end telephoto the pros use, but I’m liking it.

The nice weather that afternoon was an excuse to set up the tripod on the back deck and ambush the critters in the yard after the neighborhood walkabout.

Well, that’s the latest buzz. If you’re wondering why I haven’t been as active in WordPress lately, there’s the answer; I’ve been jonesing on photography more than writing. These new toys should help with the blogging too – the pretty picture posts are more popular than the general topic ones.  Maybe I need to buy a new toy for writing too – do they still make typewriters?