The small boy, who couldn’t have been more than 5 or 6 years old, bravely stepped up and took my hand as I descended the steps of the bus. He then led me off to discover his world.

We left Lima that morning, en route to the highlands of Peru. There are two options for making that trip, a 20-25 hour slog up the mountains via highway, or the quick, pricier way, a 90-minute flight via commercial jet to Cuzco.  As we had limited time our group took the flight.

But we weren’t bound for Cuzco that day, our ultimate goal was Urubamba and the Sacred Valley. On the way, we had a couple stops in the town of Chinchero.

The first was at Cuper primary school. It’s an interesting choice for a touring company to make, and at first I had my doubts. What possible connection could there be between an older, childless, American guy and his ilk, all well off enough to go gallivanting around the world, and a bunch of young, poor Peruvian kids? I can barely even relate to American kids as I’m so rarely around any. Turns out, it was a good choice on a number of levels.

When my young guide took me by the hand and led me towards the school gate, I had no idea what to expect. I’m not sure he did either, but he seemed to have a young, trusting innocence that all would be well.

I used much of my Spanish vocabulary to break the ice. “Como se llama? ” – what is your name?

“Wilson”, he replied. That surprised me. I was expecting something more Spanish, or Andean. What I got gave me a flashback to a humanized volleyball, Tom Hank’s imaginary friend  in the movie Castaway. I said “me llamo David“, and we moved on.

Our guide gathered up all the kids and travelers in the schoolyard and gave us his spiel. He talked about how hard it was for kids to get ahead, to get an education, to escape the grind and cycle of poverty so common in the Andes. He mentioned that was a reason the tour company sponsored various schools and helped them build up their infrastructure. The kids and teachers then sang us a couple songs in Quechua, the primary language for the locals. As the kids got older, they’d learn more Spanish. The formalities broke up, and the children showed the adults their world.

I hooked up with a new set of boys, older this time, who took me to their classroom. 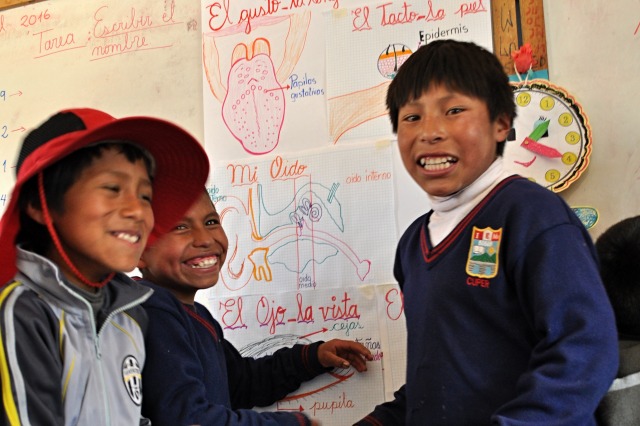 They seemed a joyful lot, full of grins, laughter, and vigor. I didn’t know if their enthusiasm was to show off what they were learning, or if they were just happy to have a bunch of foreigners break up their studies with play. Whatever the case, their friendliness and friendship were obvious.

After leaving the schoolhouse they took me by the hand and led me towards an outbuilding. I was apprehensive when they opened the doors to a low-ceilinged dark room and pulled me in. A blast of ammonia assaulted my nose, and as my eyes adjusted to the light I could see the source.

Cute little buggers, eh? I thought perhaps it was a class project, bring up some animals and learn about the process.

Turns out guinea pigs are considered a delicacy in Peru. That cute little class project was fated to end up on a dinner plate.

The fun and games continued.  The kids broke out frisbees and soccer balls and impromptu sessions broke out, testing our mobility and reminding us that Chinchero is at 12,400 feet (3,800 meters), and the air is about as rich as the people. Ancient frisbee skills from my own childhood days came in handy.

My lesson was complete. A weakness of many guided tours is they turn you into mere tourists – you never really meet the people. This one, at least for a moment, turned that on its head and we had a small taste of day to day. And it turned out that even a crusty old goat like me can be touched by a bunch of sweet, innocent little kids.

31 thoughts on “I Get Schooled”