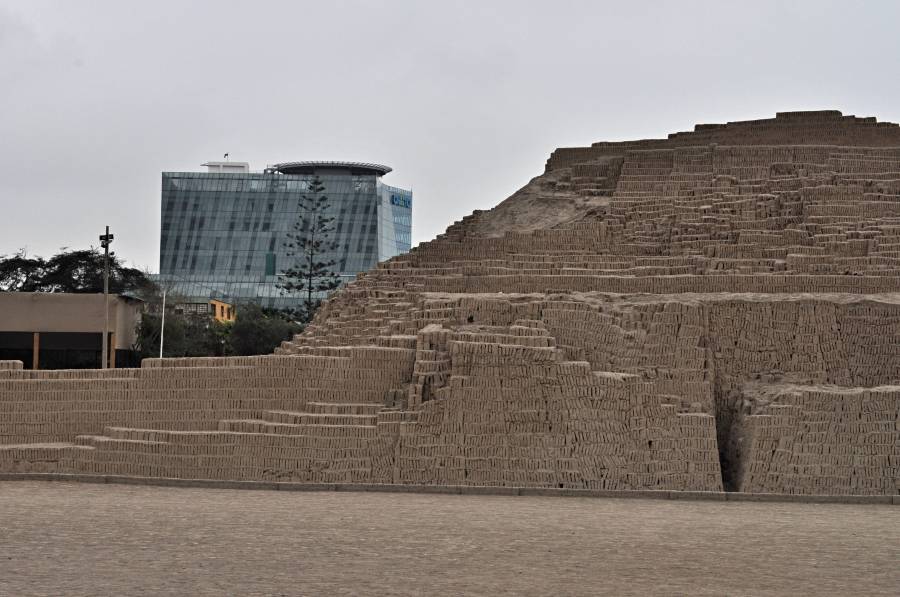 Our jet arrived in the South American skies over the city of Lima, Peru along with the first rays of morning sunshine.  Looking down with anticipation we wondered what would be revealed as we completed our long overnight flight from Portland.

The answer, alas, was not much. A low cloud layer hung over the ocean and the city, and what mountains poked above the clouds could only be seen through the windows on the other side of the plane. We’d have to wait until we landed to see what we’d gotten ourselves into.

We were in Peru to enjoy a guided group tour of some of its high points, in both a literal and figurative sense. Once we landed and collected our bags, we found our prearranged connection to the hotel and headed out into the streets under a light gray overcast.

The first thing we noticed was the traffic. Lima is a big city – 10 million strong. Although traffic lanes were clearly marked, drivers were clearly ignoring them. Anything that resembled a gap became a traffic lane that someone darted into. Three marked lanes became four unmarked. Squeeze plays were common. Drivers seem to know to the centimeter the size of their vehicle and where they could fit it in, weaving patterns in traffic like they were threads on a loom. I asked the guide why, with so many vehicles, more didn’t drive motorcycles and he said “too risky.” But bikes still darted through, missing collisions by an inch, defying death.

For both my wife and I the impression reminded us of being driven around in Manila in the Philippines. Same crazy traffic, same aggressive every man for himself approach; even the surroundings were similar except for the lack of Jeepneys. Although we’d landed with bleary eyes from the redeye flight, watching this dance with disaster made for a good wake up call. For the local guide, not so much. We’d gotten him up so early for the pick up a gentle snore soon emanated from his seat. The driver, thankfully, stayed awake.

We arrived early at our hotel in the Miraflores district, well before check in time. While this was a byproduct of our flight schedule, it was also an opportunity. The first day of the tour had nothing more planned than the group’s fly-ins. We could have conceivably flown in the next morning, but then we would have had to hit the ground running, not the easiest thing after flying 5000 miles. This way we had a free day to rest and do some independent exploring.

Lima is a coastal city. Its coastline structure has a limited beach area, with highways running next to the beaches, and cliffs running next to the highways. At the top of the cliffs in the Miraflores area, there are a series of parks with running/walking paths following along. Being only a few blocks from our hotel this seemed like a good place to check out before it was time to check in.

After our morning stroll, we returned to the hotel to see if we could check in. The rigors of travel plus our morning exercise had us on the verge of collapse. Fortunately, the hotel was amenable to an early check in, and my wife and I henceforth did a synchronized faceplant onto the bed. I cannot report what happened for the next couple of hours, but I suspect I tested Lima’s earthquake preparedness with my snores.

If you were to ask the average guy on the street about Peru’s ancient cultures, if you got anything but a blank stare chances are he’d mumble something about the Inca, Maya, or Aztecs. The Maya and Aztec were further north in Central America, so that just leaves Inca, right?

The Inca were really Johnny-come-lately’s. Traces of hunter-gatherer societies have been found in Peru going as far back as 13,000 BC. The Inca didn’t appear until the early 13th century, and their claim to fame, the Inca empire, only lasted from 1438-1532. Several other cultures predated the Inca, including the Lima culture. This pre-Inca culture existed in the modern-day Lima area, extending from roughly 100 to 650 AD, and overlapped with surrounding Paracas, Moche, Nazca, and in time the Wari civilizations.

It was a Lima culture adobe pyramid, the Huaca Pucllana, that was of interest for a late afternoon excursion.

(Note: I’ve opted to do this set in black and white to add contrast and definition. It was a gray, shadowless, flat light day and the bricks were a mass of light gray/brown, making the pyramid look like a big beige blob. See the opening shot, with the pyramid juxtapositioned next to a modern building for the pyramid color.) 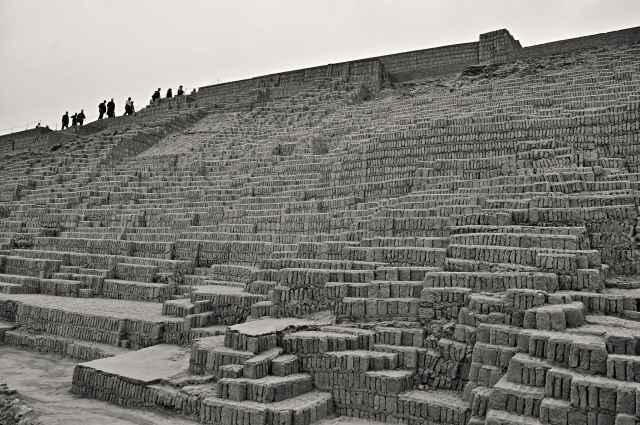 The Pucllana was an administrative and religious site, with the pyramid built from seven staggered platforms. Evidence suggests that additional platforms were added once existing platforms were “used up”, possibly from wear or from being filled with sacrificial goods, including human sacrifice. Construction occurred around 500 AD and went on for many years. 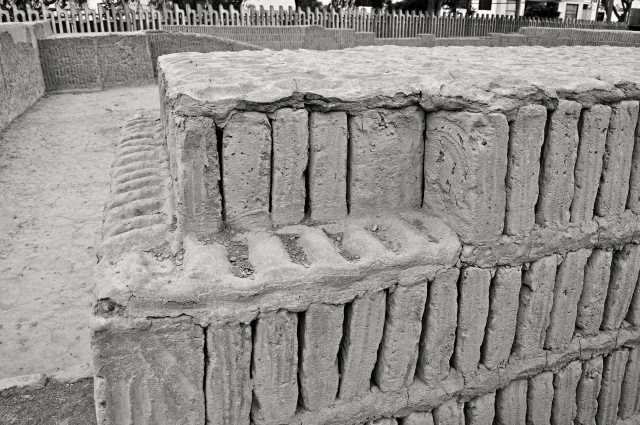 The pyramid is solid – no tunnels – and is made entirely of mud bricks. These bricks felt rock like and didn’t easily abrade. It is worth noting that the climate of Lima is dry in the extreme – less than a half inch of rain per year, so a vision of the pyramid turning into a big muddy pile of glop in the rain is unlikely.

Note the gaps between the bricks. Peru has an active geology, with the Nazca plate subducting beneath the South American plate giving rise to the Andes mountains. Earthquakes are common, and the gaps give the pyramid flexibility in a big shake.

It wasn’t just Lima culture. In the top level tiers, artifacts from the Wari culture can be found. The Wari existed from around 500-1000 AD.

The second part of the complex included an open plaza and smaller buildings used for administration, etc. 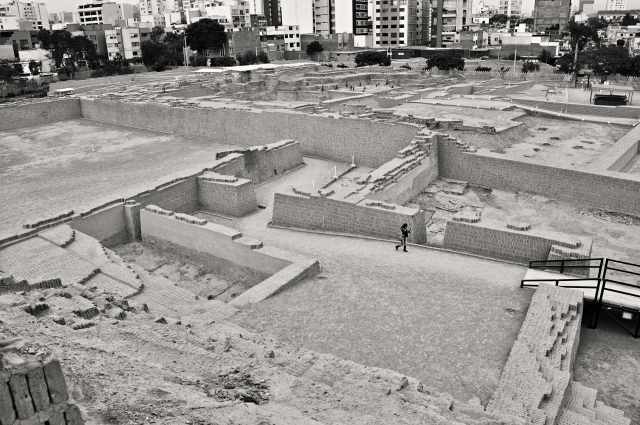 After visiting the pyramid we made our way back to the hotel for a more extended collapse. The next day the guided portion of the tour would begin, and we’d meet our fellow travelers and our professional guide.

Q. We did all this on foot. How did we find our way through Lima’s nooks and crannies without having a cell or internet connection, or a walking map?

A. Google maps. It is possible to download an offline Google map in advance for a particular region, including information on points of interest and any places you’ve saved. The map still integrates with your smart phone’s GPS so you can see where you are relative to where you want to go. Navigation even works, although only driving navigation – walking navigation and public transport navigation is not supported offline. And while you can find restaurants, etc you can’t look up their web pages. Maps expire after 30 days unless you update them.