When is a parade not a parade?

I had a quandary. Every year in the first part of June, Portland has a Rose Festival. It’s a series of events dreamed up by the city fathers over 100 years ago to help put Portland on the map of places to go in the summer. But the big poobah of the event calendar is the Grand Floral Parade, and despite its blog potential I would not be around  for it – I’d be scuba diving 180 miles away. What to do?

There was an alternative of sorts. Although I’d still miss out on the marching bands, the rodeo princesses, the lovely ladies practicing their parade waves from the floats, and all the other hoopla that comes while a parade is parading, I could still see the floats. The day after the parade they were still parked downtown for close up viewing.

So my wife and I set off on our own little parade, walking from the other side of the Willamette River into the Waterfront Park area to see the sights.

We started off by hitting Saturday market, an outdoor arts and crafts market open March thru December. I’ll be honest; I hadn’t checked it out for years – it’s more a place I take out-of-town visitors to see than a place I frequent. We should do it more often, we even have a friend with a booth (handcrafted notebooks with custom covers and bindings.)  If nothing else, it might be worth it just to order an elephant ear, a delectable pastry we’ll get with sugar and cinnamon. But if you’re a tourist, Voodoo Donuts is just around the corner.

After a search we found the floats. No lovelies waving or marching bands playing in the background, but impressive just the same.

The main floats in the parade are quite intricate. Every surface is covered by some sort of organic matter: flowers, seeds, various plants, things I have no clue of. On one, sponsored by a grocery chain, I even saw a panel of small potatoes, set into who knows what, but looking like cobblestones set into a street. 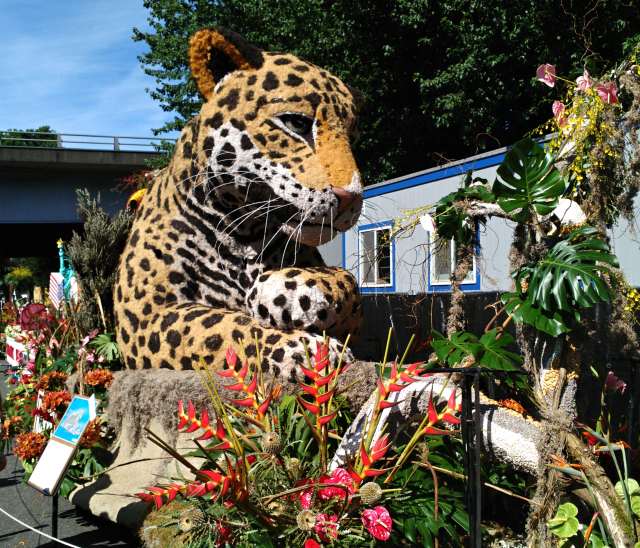 We continued our stroll down Waterfront Park, coming to the Salmon Street fountain.

On a nice summer day it’s popular with the kids. Thoughtful parents will have brought a change of clothes for the kids, or face soggy car seats.

There are other events going on as well. For the last 26 years we’ve had dragon boat races.

Dragon boat racing is a tradition out of China. The boats are big and heavy and take a crew of 22; 20 paddlers, 1 to steer, and one to call the cadence. For the Portland races, a heat runs about 3 minutes.

What’s a festival without a midway?

You’d think an adventurous guy like me would be all over some of those crazy carnival rides, but, no. Guess I must have been scarred in my youth, riding the tilt-o-whirl and feeling nauseous afterwards. That’s fun? Besides, after facing off with a pair of 6-foot wolf eels curled up in a den 65 feet deep the day before, who needs more?

Lots of folks come to visit come Rose Festival time, including sailors. Although Portland is a fair distance inland, we have access to the Pacific ocean via the Willamette and Columbia Rivers. We get visitors from the US Navy, the Coast Guard, and the Canadian Navy.

Old joke: how do you know it’s time for Rose Festival?  It’s when the seamen come upstream to spawn. 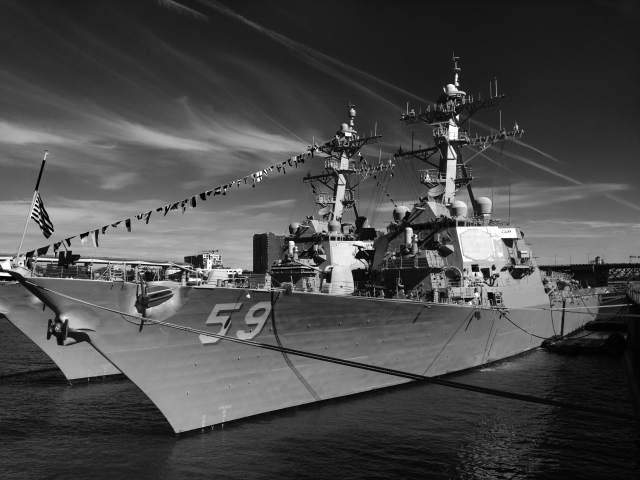 What else goes on in the Rose Festival? Lots. Especially if you consider some of the things that get deferred until later in the summer.  Here are a few of the additional events:

Sometimes we take hometown attractions for granted. After you’ve done them a few times they lose their luster. That doesn’t mean they stop being cool, and in my stroll with my wife we rediscovered the pleasures of the Rose Festival.