Geese are not known to have the sweetest dispositions. Despite its idyllic surroundings, this one, only a couple feet away from my bare leg, eyed me with fowl intent.

The goose in question makes his home at the Crystal Springs Rhododendron Gardens in Portland, Oregon. We had come on a pilgrimage to this site, not so much to visit the geese and their cousins, but to take in the Rhodies, which at this time of year should be in their full glory.

Every year on Mothers Day, especially when the weather is as sunny as Mom’s smile when the kids are being cute, the filial mob descends on the gardens to treat their mothers to a feast of flowers. Knowing this, my wife and I skipped the worst of the crowd and went the Monday before.

We had another motive as well: although Mothers Day is usually perfect timing for perfect blossoms, the weather this spring has been unusually warm and everything is blooming early. Five days of record high temperatures in April will do that.  I heard something about global warming somewhere…

Although we were a week ahead of the usual peak, this year that was already a week late. There were still plenty of flowers in fine fettle, but there were also some that were shriveling, and a few more that had closed the show and let their petals flutter to the garden path.

The Portland Chapter of the American Rhododendron Society created the original garden in the early 50’s, in conjunction with the City of Portland. It sits between liberal arts bastion Reed College and the Eastmoreland golf course in southeast Portland. It has grown over the years, and now includes over 2,500 rhododendrons, azaleas, and companion plants.

The garden is a city park, but is maintained by volunteers from the Portland Chapter of the American Rhododendron Society, the Friends of Crystal Springs Rhododendron Garden, and the Master Gardeners program. They are also responsible for education programs and special events. Because of its special nature $4 admission is charged in prime season, March through Labor Day.  Even then, Mondays and Tuesdays are free.

So what’s the crystal part? The grounds include Crystal Springs Lake, which, as you might surmise, are fed from an underground spring. This makes the waters highly filtered and clear enough to see bottom.

It also attracts ducks, geese, and those who feed them. It is not uncommon to see folks wandering about, baggy of crushed corn in hand, often with kids on one side and critters on the other, both with looks of expectation. 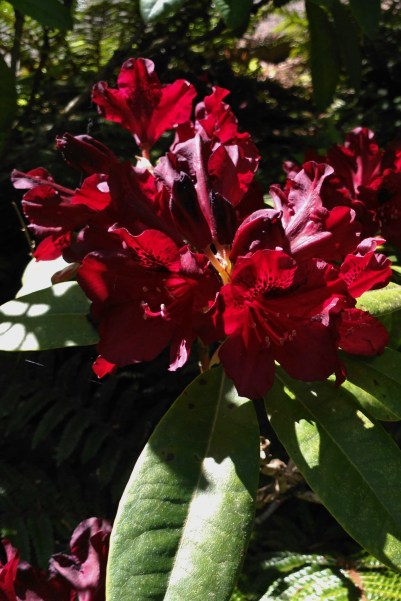 My wife and I had not been to the garden for several years and were happy to see them healthy. I was looking forward to getting good photos, digital SLR in hand, alternate lens stashed on the side. After cresting the higher of the two bridges and attempting an overlook shot, I learned an obvious lesson.

Apparently, digital SLR’s don’t work too well without an SD card. I’d left it at home, plugged into my laptop.

So once again I fell back to the cell phone camera. Little did I know, a year ago  when I broke down and got a smartphone, that the little bugger would be so useful.

As for that goose we met early on, his intent was more fowl than foul and I was not risking battle scars on my shins by wearing shorts. Perhaps if I’d have ventured closer to his mate’s gosling he’d have wielded his beak as a broadsword, but he was more interested in wielding it as a shovel, hoping I’d lay a pile of crushed corn in his path.

And the walk through the gardens among the flowers and reflective ponds provided both serenity and diversion – a lovely way to spend a spring afternoon.